Adam Chodzko is an artist working across media, exploring our conscious and unconscious behaviours, social relations and collective imaginations through artworks created as speculative forms of ‘social media.’  Exhibiting his work nationally and internationally since 1991 Chodzko’s practice asks ‘what might we be becoming?’ by examining ways in which the visual might enhance our perception in order to create better connections with others. 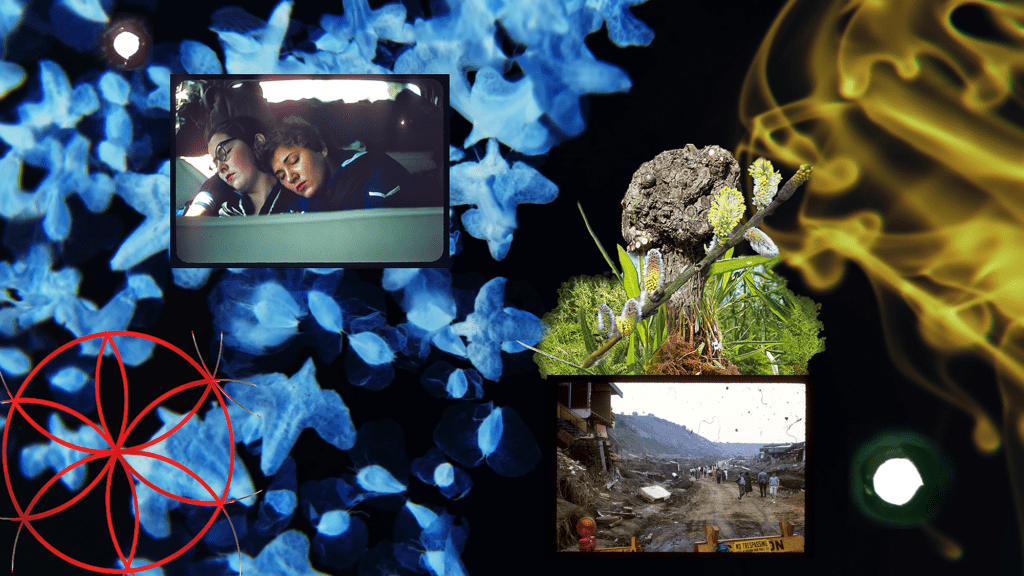 Adam Chodzko’s art explores the interactions and possibilities of human behaviour by investigating the space of consciousness between how we are and what we might be. Working across media, from video installation to subtle interventions, with a practice that is situated both within the gallery and the wider public realm, his work investigates and invents possibilities for collective imagination, wondering ‘how might we perceive better’?
Through questioning the act of seeing, Chodzko explores how, through art (with its potential to both be visionary and blinding; an ‘image filter’) we can reveal concealed realities, ‘hauntings’, lying dormant within the everyday. His practice operates between documentary and fantasy, conceptualism and surrealism and public and private space. Chodzko often engages reflexively and directly with the role of the viewer so that the work appears to be in the process of ‘making itself’ through looking.  His practice turns his own everyday lived experience into ‘science fictions’ or ‘speculative fictions’ following a path in the present towards its alternative realities, its hyperstitions.
This creative system draws together into a single body of work contexts as diverse and heterogeneous as communication, consciousness, attention, perception, disavowal, embodiment, migration, ritual, ethnography, digital technology, ecology, climate change, place, identity, history, etc.  His artworks are frequently catalysed by imagining a collapse of the category of Art, or the necessity for a ritualistic sacrificing of it (acknowledging art’s precarity whilst questioning its frequent insularity), requiring not only a new audience and new forms of artist, but also a new empowered status for the art object.
Working directly with the networks of people and places that surround him Chodzko focuses on the relational politics of culture’s edges, endings, losses, displacements, transitions and disappearances through ‘looking awry’; a provocative working with the ‘wrong’ place, or time, or question (‘taking the wrong end of the stick and using it as a compass needle‘). He often ‘outsources’ seers, beyond a field of knowledge’s  usual constituencies and experts, in order to catalyse new productive mistranslations. 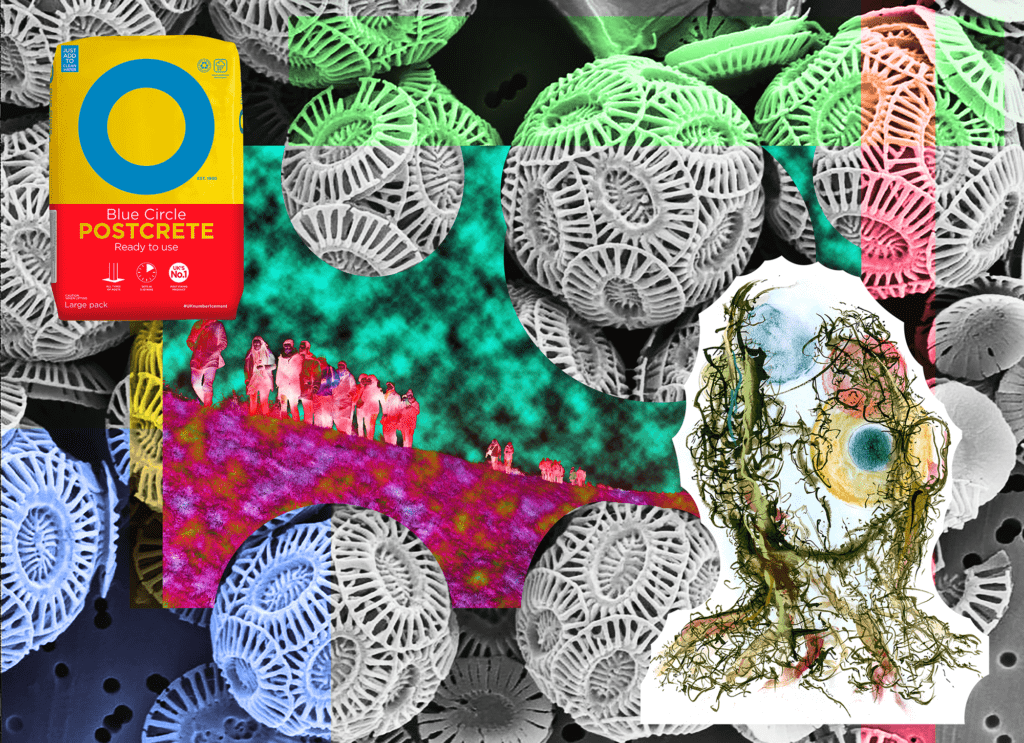 Ephemeral communities are frequently generated through these processes of ‘making together’; assemblies of owners of a particular jacket and a reunion of the children ‘murdered’ in a Pasolini film; a god look-alike contest; lighting technicians asked to advise on the light in heaven; a London gallery’s archive given to a group of Kurdish asylum seekers to edit and hide outside the capital; the multi-faceted Design for a Carnival, the evolution of a communal ritual event for the future including Settlement, the legal purchase of a square foot of land as a gift to a stranger, Nightshift, a late night parade of nocturnal animals to the Frieze Art Fair, London and M-path, the collection and distribution of perception-changing footwear for gallery visitors. More recently a trilogy science fiction video and mixed media works, Hole, Around and Pyramid, have all explored a narrative where art (through a state of ‘future ruin’) becomes a vehicle for a community’s collective mythology as a way to break ‘bad patterns’ or deviate from a ‘bad path’, whilst Echo, The Pickers and Ghost elaborate these themes through excavating processes of memory, empathy and the imaginary and redressing perceptions of trust, and active and passive states. Because…, 2013 (at Tate Britain) and We are Ready for your Arrival, 2013 (at Raven Row) and A Room for Laarni, Image Moderator, 2013 (at Marlborough Contemporary) further develop these ideas through manifestations of the unconscious relationships between individuals and groups; their excesses, dreams, connections and disappearances. 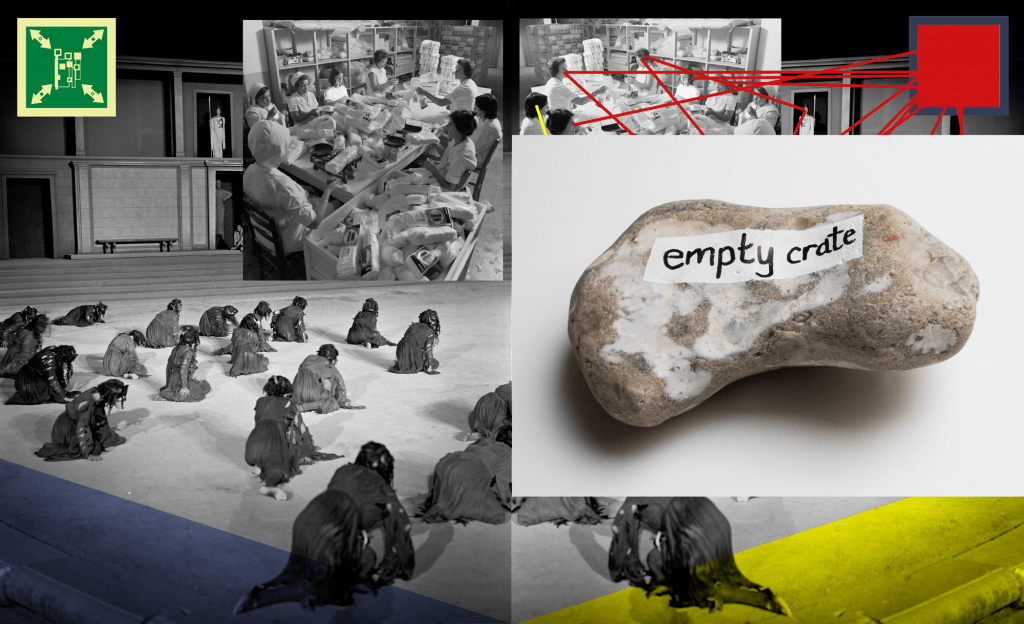 The latter work explores the relationship and flow of images between a western European social-networking site (for teenagers) and an image moderator, based in the Philippines, whose job it is to monitor this flood of digital photographs, in order to flag up those whose contents might be deemed ‘bad.’ Deep Above (2015) and Rising (2013) continues to expose this process of making sense of imagery in relation to our collective and individual responses to the threat of climate change. These works speculate that, inadvertently, a repurposing of ‘art thinking’ might be the only way of short-circuiting the psychological paralysis to take action in order to avert climate change caused by our brains’ evolutionary hard wiring, while Sleepers (2016) explores our empathic projections in relation to the spectacle of the unconsciousness of others. Channel, Rupture, 2015 and Design for a Fold, 2015,  both continue Chodzko’s speculations about the affects of flows of empathy across time and space and between the local and the remote.  Many of Chodzko’s works evolve through this sense of projecting outwards from the self into the perception of, not only other people, but also the inanimate through migratory embodiments with objects, rooms, places, institutions, images. 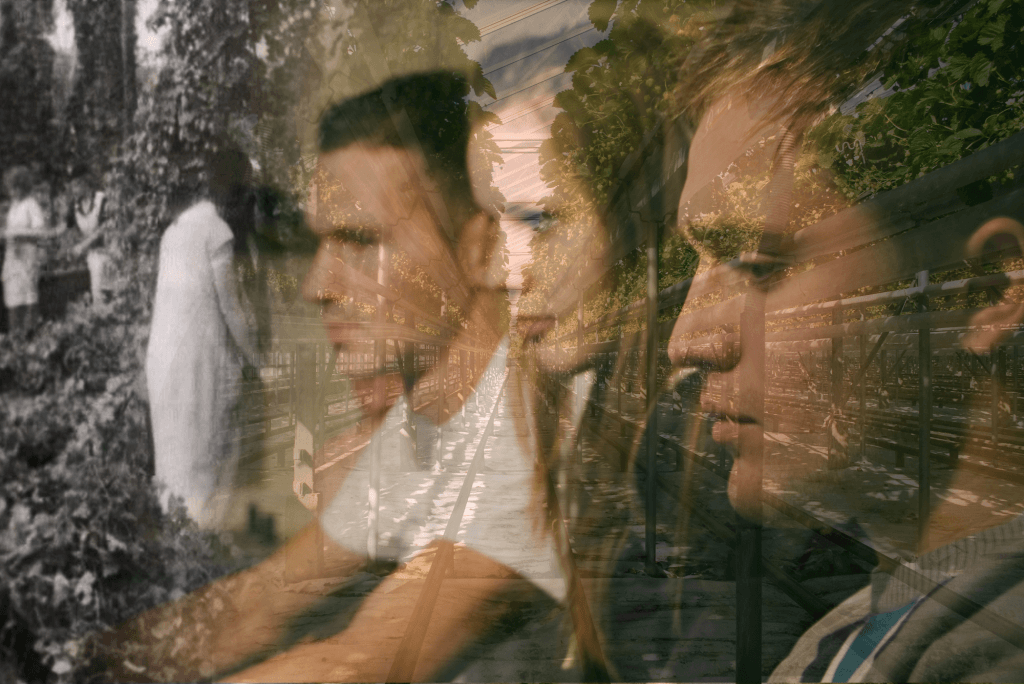 The pedagogical performative works The School of Beginnings and The House of Beautifully Earned Trust (both 2018) developed from folding the imagined ‘end of art’ into its current reality; the erosion of art education by the neoliberal ideologically driven ‘economic need’.   Creating a group, Muster Station, from recent students Chodzko had worked with while teaching within the University of Kent’s Fine Art department and as a response to the University’s decision to close their entire School a series of collective works were formed as questions of creative survival. The School of Beginnings (at Tate Exchange): imagined art having ‘ended,’ resulting in museums’ objects being used solely for data storage. The House of Beautifully Earned Trust (at Whitstable Biennale) proposed that in order to truly understand the scepticism about art’s purpose we need art to transform itself into a home and its family, living, somehow beyond art’s existence, yet hospitable to anyone.   Recent works have continued explorations into the relationships between place (particularly the idea of ‘the garden’), perception, identity, mythology, ritual, language, the body and the unconscious (eg; A Hostile Environment   (2019), Fluid Dynamics; The Quail is Rising (2020), O, you happy roots, branch and mediatrix  [live] (2020), Thru hole I blind/O/Thru hole oui see (2020), The Return of the Fleet Spring Heads (2021)), The Valley Unfurls its Song (2021), and the The Green, the Flow, the Path of the Game (2021)

Or…Perhaps try this 2.5 mins trailer for an artist’s talk by Adam Chodzko.

Chodzko has been included in many British Council curated international exhibitions of British Art, from General Release (1995) at the Venice Biennale, to Micro/Macro: British Art 1996-2002,(2003), Mucsarnok Kunsthalle, Budapest, Breaking Step (2007), Museum of Contemporary Art in Belgrade and Private Utopia (2014), Japan.

In 2002 he received awards from the Hamlyn Foundation and the Foundation for Contemporary Art, New York, and in 2007 was awarded an AHRC Research Fellowship in the Film Department at the University of Kent, Canterbury. In 2015 Chodzko was shortlisted for the Jarman Awards. In 2016 he received a DACS Art360 Award.

He has lectured and, or, tutored at numerous Higher and Further Education institutions internationally including, in the UK; Central Saint Martins, Chelsea College of Arts, Slade School of Fine Art, Goldsmiths University of London, University for the Creative Arts, Sheffield Hallam University, Open School East and Ruskin College, Oxford. In the US: Carnegie Mellon University, Rutgers University. In Canada: Banff Centre. Chodzko is part of Double Agents, a Research group based at Central Saint Martins College of Art. He was Senior Lecturer in Fine Art at the University of Kent from 2014-2018.
♦
Adam Chodzko’s selected moving image work is archived on Vimeo.
“I’ve tried weaving it; could we now use it as a sail?” ; 2.5 mins trailer for an artist’s talk by Adam Chodzko.
Book a studio visit with Adam Chodzko on StudioVisit.
Adam Chodzko’s archive of selected moving image works for exhibition, with LUX.
Image licensing for selected works through DACS
Information about Adam Chodzko’s archive of artworks, via Art360 Foundation.
♦